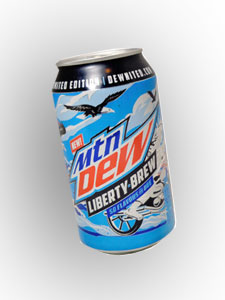 When you first start poppin' the top on your first U.S.-certified Mountain Dew Liberty Brew, you might be thinkin' … just what does "50 Flavors In One" taste like anyway?

Liberty Brew tastes like blue jeans, bobby socks, cheeseburgers, and freedom. It tastes like you, me, and all our American brothers who came in through Ellis Island and chased their American dreams straight up Lady Liberty's generously draped labiae.

Plain and simple, Liberty Brew tastes like America. The band and the fuckin' country.

And in terms of the actual flavor … ehh, more or less just blue Flav-R-Ice.