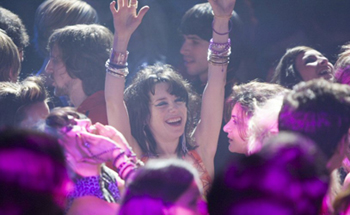 For better and worse, Mike Leigh is, above all else, an honest filmmaker. He's never been afraid to turn over the rocks of the human condition and show you the unpleasantness that often lies beneath. And even though he doesn't sweeten his films with the processed sugar in which Hollywood bathes everything, his films ultimately come off as sweet (well, bittersweet, anyway), because they ring of truth.

In all honesty, I was not looking forward to Happy-Go-Lucky because, based on the marketing, it seemed to be consciously aiming for that bullshit quirkiness factor American audiences eat up. From the posters and trailers, you'd assume this film was basically Juno driving around in Little Miss Sunshine's yellow QuirkMobile™.

In fact, Happy-Go-Lucky is not only not that film, it in many ways seems to be a conscious inversion of it. The first fifteen minutes introduces Poppy (Sally Hawkins), the world's most preposterously, infuriatingly upbeat character. What's that?! She takes trampolene lessons! Wot, wot?! There she is making childish paper masks in her flat!!!

But it is to Leigh's great credit that all the Fox Searchlight Quirkshit® is well-grounded in real life, and in the truth of the character. Where Leigh's knack for exposing human ugliness was once his focus, here he seems to be doing an older, wiser revisitation of Naked: seeing the potential for humans to truly be good.

And what's most refreshing about HGL is that Leigh manages to let the various threads of the story unfold without judgment or cynicism – in various places it recalls Life is Sweet and Career Girls in terms of simply letting the characters be who they are. And just when you think he is about to give Poppy some kind of dark comeuppance for all her optimism … he doesn't. Leigh now is willing to see the possibility for someone to be helplessly full of joy as another might be helplessly despairing.

It's a damn good movie, one of the best I've seen in a long time. Hawkins deserves every lick of praise she received for her performance, and the ensemble cast is, as expected, right on the money. In a time where seemingly everyone with access to the Internet wastes no time showing the world how snarky they can be, it's inspiring to see a filmmaker like Mike Leigh showing how shallow this attitude really is.

I'm frankly at a loss to think of a storyteller so consistently proving himself a Great Artist: putting creations out into the world that will unquestionably still be there 100 years on. Certainly the same won't be said of the many people whose Twittered dismissals of films like this one barely register even right now.