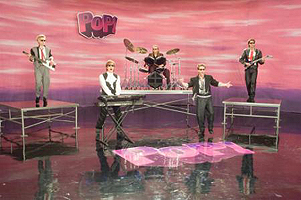 Drew Barrymore as the ditzy, rambly "plant waterer" who happens to write great pop lyrics, but for some farkakte reason, doesn't want to help Hugh write the next pop hit for a Britney-esque superstar? Bleh.

A great premise is consistently sunk by romantic comedy contrivances here, with so much unnecessary tension forced into the script that you wish they'd just taken the low road and done a Spinal Tap-style mockumentary fully focused on the fake 80s music. That Music & Lyrics wouldn't have been very good either, but at least its failures wouldn't have been so wholly fake.

The major disappointment here is that this might have been the one Hollywood rom-com that music nerds could get behind. The faux 80s hits are very funny; Fountains of Wayne frontman Adam Schlesinger arguably does his best work in genre-parody-for-hire (see also Andy Partridge). A knockoff of "Careless Whisper" called "Meaningless Kiss" hits every 80s cliché without pandering a la Totally Awesome, and "Pop! Goes My Heart," fake or not, might be the year's best pop song.

The script, unfortunately, struggles to match the perfect pitch of the soundtrack. Barrymore's character is blatantly shoehorned in to fulfill the "Will they? Won't they?" construct, and her affected quirkiness gets old fast. Her resistance to even the most banal situation is clearly designed to allow the plot to stretch out, but she's illogical, unnecessary, and ultimately just part of the formula.

Kristen Johnson is very funny as Barrymore's sister (a former "Pop!" fan), and surprisingly, so is Brad Garrett as Grant's manager. The faux-Britney is done well, certainly pure satire but not without a good amount of attention to detail. And I did enjoy the fake "Popup Video" end credits, despite the anachronism.

In the end, though, Music & Lyrics is a misfire, if a reasonably breezy one. I could accept that the fault is mine for expecting Hollywood to deliver a satisfying romantic comedy for pop music connoisseurs, but given that the studio went as far as getting Martin Fry from ABC to be Hugh Grant's vocal coach, I think it's safe to say this movie is just a giant compromise.