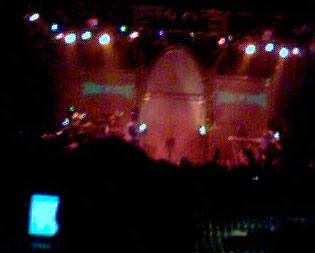 Once again we join our aging metalhead friends La Fée and Dr. Martin Absinthe as they discuss a recent foray back into the darkness …

La Fée: So, good sir, as seems to be turning into an annual tradition for us, we once again found ourselves among a teeming throng of mostly young teenagers turning out to see a year-capping metal show. The band: Cradle of Filth. And while I enjoyed the show, I must say I am just not getting much out of live shows these days. Have I finally become too old to rock?

Absinthe: I share your concern. The best show I went to recently was Marilyn Manson back in November (you missed him this time 'round). I sat up in the balcony of the Riviera with a gin and tonic alongside all the other crotchety old rockers and thoroughly enjoyed myself. It was almost like watching TV at home.

In this case, we actually had a relatively "old-person's" position behind the mixing desk. I must admit that I was having a difficult time ignoring my back pains and the cramped conditions in order to enjoy the show. I often found myself wondering if I might have enjoyed it more if I were listening to the disc at home. But would a Cradle of Filth show REALLY be a Cradle of Filth show if we were all in Lay-Z Boy recliners with Grey Goose martinis?

La Fée: I suppose not … though I'm almost ready to admit that I prefer a comfy chair and a good drink. I think I lasted five songs into Cradle's set before claustrophobia and exhaustion set in, and I had to retreat to the periphery and watch the show from there. I think the ideal scenario would be watching them in Vegas.

Absinthe: Actually it was on the third song when you balied. I remember because it was during one of my favorites, "The Principle of Evil Made Flesh." Our stamina is definitely at an all-time low. You looked pretty damn woozy.

I don't know what's wrong with us. We once sat in 100 degree weather for eight hours while the sun burned you to a crisp to catch Robert Cray! Now we get cranky three songs into a Black Metal show. Sad, sad times.

La Fée: Please stop outing me as a Robert Cray fan. Ah, but maybe we were just having an off night … it was a Tuesday, after all. Still, perhaps Cradle just didn't bring their filthiest level of sheer entertainment this time. 'Cause I had no problem at all with Arch Enemy, the beguiling opening act. Death metal with female vocals! They rocked my ass all the way back to the womb … I'd pay $1,000 to be locked in a hotel room with the lead singer and have her beat me within an inch of my life.

Absinthe: I agree that something was off with the filthy boys. Though the band sounded good, Dani's voice wasnt at its shriekiest best, and Sarah Jezebel's vocals sounded really poor in "Nymphetamine" and "Her Ghost in The Fog." This is too bad, because people are generally saying that her version of "Nymphetamine" live is far better than Liv Kristine's version on the disc. It must have been an off night because the performance we saw did NOT support this. The studio version far surpassed the live version. Liv Kristine's vocals on disc are SOOO mouthwateringly evil and sexy, while Sarah's sounded horribly off. And why the FUCK didnt they play the full 9-minute version of "Nymphetamine"? The single version just didn't do it for me.

La Fée: Not being as familiar with their music as you are, I can't say I was as disappointed with them musically (though they seemed much more "on" last time), but visually, I was totally nonplussed by this show. None of the absurd theatrics and stage settings that I expected; no goth gymnasts dangling from ropes; no dancing gargoyles. Stripped of these elements, the band somehow came off as merely cartoonish. Although "Gilded Cunt" did bring a smile to my face.

Absinthe: Yes, I will be quite proudly wearing my "Gilded Cunt" t-shirt at Christmas dinner this year. It will replace the more appropriate, but now old-hat "Jesus is a Cunt" t-shirt I normally wear. 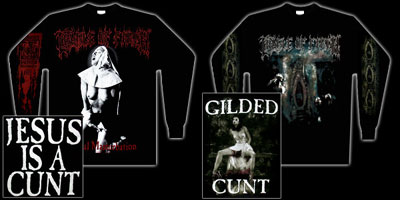 CoF puts a lot of thought toward their style and substance (or lack of substance). It's a bizarre kind of British humour that can splice such imflammatory comedy with genuinely meaningful Luciferian idealology. Mind you, I'm not talking about the Christian view of Satanism, but the Luciferian idealogy that really owes more to William Blake than to Jesus Christ. Filth, or at least Dani, really plays with this concept. A good resource of Filth lyrics can be forund at darklyrics.com. It's a pretty fun read to go through the words behind Damnation and A Day and follow through a biography of Satan. I am a little concerned that their stage show is starting to get somewhat dull. Music as wild as theirs needs gargoyles walking around to really be amusing.

La Fée: Well, I suppose even Satan himself got lame after awhile. Once the novelty wore off, it was just more of the same … and he hasn't done anything truly impressive since the Holocaust. Then again, 9/11 was pretty cool, so maybe Cradle of Filth still has some tricks up their sleeve too. Time will tell.

Absinthe: Hmmm. While you were writing this, a tsunami killed 33,000 in Asia. Looks like someone was trying to prove you wrong. Hail Satan!

La Fée: Satan is a cunt.