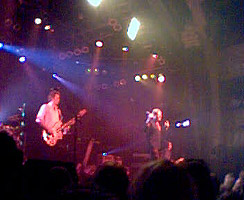 It wasn't clear to me whether this was a concert or the world's largest bachelorette party as a seemingly entirely female audience packed the House of Blues to capacity for the return of Duran Duran's orginal lineup.

Reluctant as I am to admit it, I'm metrosexual enough to have fit in comfortably, like the pseudo-gay friend who would tag along to such a party. At any rate, it meant I was able to secure a locale on the floor very close to the stage without having any skinny tall guys in front of me, as with every indie rock show I ever go to … instead, it was wide-eyed teenage girls and their boozy grownup counterparts.

The band looked fantastic, as debonair as ever, if slightly more fleshy, and while Simon can't quite hit the high notes, it must be remembered that he never really could, anyway.

It was a fantastic, breathtaking show, with a setlist that included virtually every song I wanted to hear and none that I didn't. Though not a DD diehard back in the day, I was and still am enough of a fan to be able to sing along with nearly every tune. My 1984 self leaped to the forefront, taking full control of my body and turning me pretty much into the teenage girl I always should have been.

First impression was that Simon Le Bon and John Taylor are so much taller than I imagined. And they clearly enjoyed playing for such an adoring crowd. John in particular looks fantastic with a new hairstyle that I immediately vowed to adopt … where else but a Duran Duran show does one come away as excited about the hair as the songs?

"A View to a Kill" made for a surprisingly bold opener, right into the excellent "Planet Earth." A couple of overpriced beers helped me gauzily transport right back to the Seven and the Ragged Tiger era and temporarily ignore that this was not quite the same thing.

High points: the luscious "Come Undone," "Is There Something I Should Know," "Save a Prayer," "Notorious" (very good live … could only have been better had Sparkle Motion joined them on stage), and, shockingly, the never-before-performed-by-this-lineup "Union of the Snake." That must have been a sign that God is pleased with me, as the band doesn't do much Ragged Tiger stuff live, and it's my fave album by them. It was a bit ragged, yes, and it wasn't "New Moon on Monday" … but clearly I'm doing something right if Duran Duran chose this show to debut "Union." 'Cause it's all about me, not the swooning, swaying bachelorettes!

A couple of new songs were played, which aren't quite up there with the old stuff, but were surprisingly un-tune-out-able, and offered some hope that the reunion album may well end up being up to snuff. By the end of the show, I'd had my fill, not so much of the band, but of the crowd, so I was pleased by a single concise encore ("White Lines" and "Rio"). Most amusing to watch a roomful of people, most of whom have certainly never touched cocaine, singing along gleefully with "White Lines," while meanwhile the band is singing it with a whole different intent.

But Duran Duran fandom has never been about self-identification … you love 'em like you love a superhero, 'cause they're larger than life. Your life, at least.

*Sigh* And, yes, mine too. That's it, I'm going for that haircut first thing in the morning.