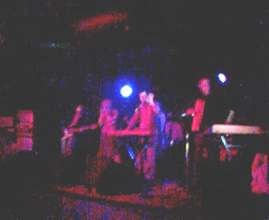 One pleasing, yet also unsettling, aspect of my musical tastes is that through no deliberate choice on my part, they simply never match anyone else's. Call it being ahead of my time, or completely out of touch … either way, the bands I think of as being the best in the world seem out-and-out dismissed by the rest of the world.

Case in point: My Favorite playing their first-ever Chicago show. This delightful band is a giant, joyful shout-out to the synth-pop that soundtracked my troubled adolescence, rekindling the same validating buzz of communal depression that once was the domain of New Order, OMD, and The Cure, without really sounding like any of those bands. They make music to wear your most worn-in trenchcoat to, standing outside in the emotional rainy night of your own private Say Anything.

My Favorite put out a series of three EPs in the early 2000s (Ha, remember the 2000s? Hilarious!) using Joan of Arc as a metaphor to explore teenage alienation … the martyrdom of youth! Their lyrics are precious, but perfect; their sound is retro, but fresh. Their melodies are unstoppable.

So why are they not the biggest band in the world? Why are they playing a Sunday night at the Empty Bottle? Why, good God, are they opening?

Who the fuck knows. I experienced the same thing going out to see Call and Response at Spaceland in LA a couple years ago … in my world, this was going to be a sold-out show, packed to the gills with sweating, swooning fans all singing CAR's brilliant bubblegum songs at top voice. In reality, there were about 20 people there, standing utterly still, with more trickling in to hear the following bands, who were fine, but much more based on sound than songs.

Maybe good ol' pop songs are terribly unfashionable right now; I'm not the one to ask. But once again, here I was, standing in a club all but barren, with the few people there more concerned with cheap drinks than these amazing songs, and two additional bands who have a "sound."

My Fave has a sound, too, you know – it's the sound of your heart crying. Yet you can also dance to them … not that any indie rock kid in Chicago has attempted to dance since Steve Dahl blew up all those disco records.

Well, then, if that's how it's going to be, then I'll gladly have My Favorite all to myself. The show was not disappointing at all, even though I've played the band's discs to death and feared the live presentation would be super-ragged. There were a few moments of unintentional dissonance, a couple of bad harmonies, a few rushed drumbeats, sure … but that's live music. Nobody's trying to be Duke Ellington anymore, you old codger.

The set was entirely from The Happiest Days of Our Lives, My Favorite's 2-cd set compiling the "Joan of Arc" EPs (plus remixes). They played all the ones that rummage through my heart and read my diaries aloud: "Homeless Club Kids," "Burning Hearts," "The Suburbs Are Killing Us," "Le Monster" (probably not in that order; I was drinking). Of my favorite My Favorites, only "The Black Cassette" did not make an appearance.

The clear focal point was the lovely Andrea Vaughn, who is as pretty as her voice, and as delicate; she was mesmerizing. Band leader Michael Grace Jr., who wrote all the songs and sings several, seemed uneasy in his skin, not commanding a presence of Sheer Genius, as I'd expected. At points, his awkward stage dancing came off like a very drunk Eric Bogosian teaching himself Tai Chi from a poorly-mimeographed pamphlet. If he can find the personal confidence that his music reflects, this band surely will be the next U2, and we will all be singing "Homeless Club Kids" loudly out of our car windows on a Friday night.

Until then, they will remain a cult band (if they are even that now; my faith in them seems to be rather avant-garde) … I wish they'd come here and simply demanded that the audience love them. Because what My Favorite deserves is global adulation, not just me playing their records on my Discman®.

I didn't stay for the other bands, though I did want to see Seksu Roba, who were playing last. As I said, it was a Sunday night, and furthermore, I was simply unwilling to sit through a local band called Los Shut Up, no matter how they sound.