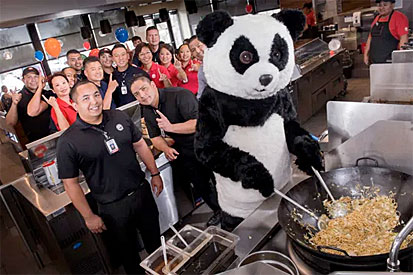 I once had an absolutely terrible boss. He'd barge into the tiny room where me, Cone, and Tamy would be hard at work, and say to us, "Fuck you, fuck you, and fuck you. Now, who wants Panda Express?"

It took me several years to stop associating Panda Express with Mr. Pembellow's constant bullshit. At the time, I felt like Panda Express was quite literally the least he could do to compensate for his poor leadership skills. Nowadays, I can appreciate ol' P.E. for what it is … totally consistent, pretty tasty, and not completely unhealthy fast food.

The 'Spress at Village Crossing is like any other. It's usually busy, but the line moves fast, and you're in and out faster than you can say "AiiiIIIIIiiiieeeee, kamakazi chinkachongo!!!!!" You shouldn't say that, I'm only even mentioning it for reference on how fast the service is.

I usually just get a bowl, which is plenty of food … I go with a split of chow mein and Super Greens with Kung Pao Chicken. If I'm feeling super indulgent I'll get a plate and add the ol' broccoli beef. Sometimes, I'll even throw in a chicken egg roll. They don't quite hit the spot, but they hit a spot, and sometimes that's just fine. For this particular visit, I did indeed do the plate. Pretty unbeatable portions for $8.98, even Unkar Plutt was impressed.

The Super Greens are really the key to a good "Dance With The Panda," as they say. You kind of need them to offset all the carbs and sodium, and, you know, to keep your shits on fleek. Not to mention they're tasty. As Panda Express explicitly states in their 2020 Super Bowl commercial, "if you ain't eatin' the Super Greens, your shits just ain't on fleek."