The war in Iraq has obscured perhaps the most important aspect of Saddam Hussein's contradictory life – his solo albums. The media has not presented much coverage of Hussein's musical career, choosing instead to focus on elements of his regime that seem more negative, such as torture. And while Hussein was successful as a torturer, he was even more successful as a multi-instrumentalist with omnivorous musical tastes.

Long before his dictatorial days, Saddam got his start in an Iraqi doo-wop group called The Five Kews (named for the Iraqi national bird). The Kews recorded a series of hit singles before disbanding in the early 60s when public interest in that style of music began to wane.

He continued getting regular session work through the 60s and early 70s before landing a spot with the acclaimed prog-rock group Sulphur, with whom he recorded the classic albums Sulphurous Emission and Unbreakable Sulphur. His synth work has been cited as an influence on European avant-garde groups such as Can, Kraftwerk, and When.

He kicked off an enduring solo career that ran parallel to his military and political involvement, recording even up until his death in 2003. Reports indicate that Saddam left a lot of unreleased music in the vaults, and government-run Iraq Records had planned an extensive reissue campaign of his back catalog with restored packaging, digitally remastered sound, and bonus tracks.

While his releases remain difficult to obtain outside of Iraq, here is a selection of some of the most distinctive recordings of Saddam's career.

Saddam's 1979 release finds him in a mellow mood surrounded by a comfortable bed of Fender Rhodes, strings, congas, and lush arrangements that recall similar-era albums from Charles Aznavour and Caetano Veloso. Fans of his early work may have considered this a limp sell-out, but its smooth balladry and smart instrumentation hold up remarkably well.

A collection of mostly Iraqi jazz and blues standards recorded with a tight quartet (Saddam himself plays piano and sings), Saddam Blue was the second of three similar releases he put out in the early-to-mid-1980s. Although the lyrics are timeless, there is a world-weariness in his singing that is impossible not to associate with his deeply troubled feelings about the first Iraq-Iran war.

Saddam shocked supporters and detractors alike with this radical departure from his conventional "adult contemporary" sound. Uncle Saddam is an angry polemic aimed at world leaders who he felt were misunderstanding him. Featuring tracks clearly inspired by Public Enemy and Guns N' Roses, this record restored Saddam's underground cred, especially given that it was released on the only indie label in Iraq, Iraq N' Roll Records (which actually is also government-run). The hostile title track prefigures both Nirvana's Bleach and PJ Harvey's Rid of Me by showcasing Hussein's blistering Minutemen-like guitar power and screeching vocals alongside ferocious drums and fuzz bass. The CD reissue includes a song Saddam released as a split 7-inch with Iraqi rock band Kewblood.

Returning to a more conventional pop style following the first Iraq-U.S. war, Saddam decided to hole up in his home studio and record everything himself, from keyboard programming to drums, synths, piano, guitars, bass, and much more. Owing something of a debt to George Michael's Listen Without Prejudice Vol. 1, (one of his all-time favorite albums), Hearing Without Listening deals with Saddam's emotions following the war and the continuing reconstruction of his homeland. The only non-original was a particularly well-chosen cover of Fleetwood Mac's "I'm So Afraid," on which Saddam's drumming is notably intense, as is his sad vocal. 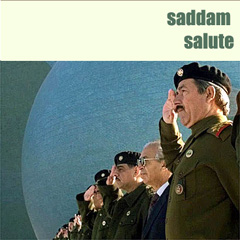 One of several best-of's in the Saddam catalog, Saddam Salute is a perfect introduction to his music, much more comprehensive than Saddam Gold Hits or National Best from Saddam. It benefits from a meticulous track-listing covering all of his major singles, plus two tracks recorded specifically for the album which easily stand alongside his best. Saddam himself wrote the liner notes for this two-disc compilation, which was advertised on television and offered at a special low price. As such, it is easier to find than many other Saddam CDs in Iraqi used record stores.