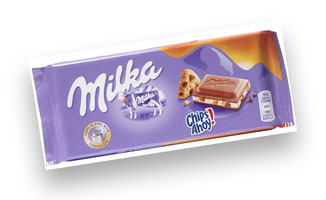 If you've spent any time at all in Switzerland, Austria, and/or Germany, you've undoubtedly seen one of the famous "Welche Milka?" ("Which Milka?") commercials whose concepts play off the seemingly endless varieties of the region's most popular chocolate bar.

There's the one where the harried husband goes out to get a specific Milka to satisfy his very pregnant wife's latest craving, only to find each store out of that specific one, until he finally ends up getting beaten to death in a back alley while trying to buy his wife's favorite from a "pusher."

There's the groundbreaking and controversial one in which a trans teen, through the process of deciding which Milka bar to buy, manages to decide which gender to be.

And then there's the one where the harried husband goes out once, twice, three times, four times, etc, at the insistence of his nagging, emasculating wife to get various different Milka bars to satisfy her premenstrual cravings, only to finally have an "aha" moment in which he buys a literal ton of Milkas and suffocates the old crone underneath them all. This is a different harried husband than the one with the pregnant wife. 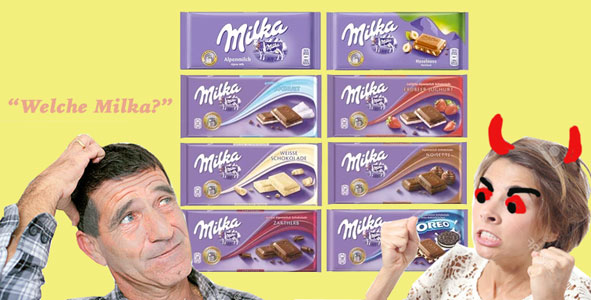 Now, to the burning question: "Welche Milka am I reviewing?" Milka Chips Ahoy! gives you a thin layer of crunchy cookie, not particularly identifyable as Chips Ahoy!, amidst a big bar of milk chocolate, the quality of which is about Nestlé or so. The sum is more than its parts here, 'cause this is one tasty candy bar. It's kinda like if Caramello had a stiffie.