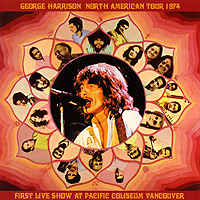 Listening to this boot of Beatle George's first live show on his jubilant 1974 tour, it's like you're there. Yes, right there, in the very back row of the cavernous Pacific Coliseum, surrounded by rowdy Canadian fans, unable to really see anything or clearly hear the music amid all the distortion and echo.

In spite of the grungy sound quality, this is still a bit of a treat for Harrison fans, as it captures the loose energy of what was a fun, revue-style tour – probably the best solo Beatle tour of any, though it's not regarded as such and isn't at all well-documented in the bootleg world.

But yeah, it sounds a bit like shit. The 2-disc boot Fort Worth Express is much better sounding and is a complete show, so that's the one to grab. But of course, if you're grabbing a George Harrison 1974 tour bootleg in the first place, you'll certainly grab all of them. Is Beatles collecting categorized in the DSM-IV yet?