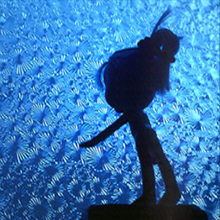 Ah, Magnesium … these guys were one of my fave live bands around Chicago a few years ago, before the bastardos moved to San Francisco, leaving their dedicated fans behind in pursuit of, I guess, dedicated San Franciscan fans instead. So as with professional sports and regional dialects, Chicago loses.

Live, Magnesium is a frenetic and almost bizarre experience, but a deeply funky one that draws you in even if you're pissing your pants in fear. Your fear is not so much of the band's sound, but of the new. And on record (you can download Occidental Hygiene directly from the Magnesium website, cover art and everything), they're just as commanding.

The lineup – guitar, drums, and "robot bass clarinet" plus triggered samples – pushes the Magnesium groove into terrifically dark and seductive places, like a well-hung and centuries-experienced vampire overlord. You're best off just submitting to the delirious bloodbath.

Micah McClain anchors the sound with impossibly diverse yet amazingly consistent druimming, alternating from jazz to funk to metal on a dime and never letting you catch your breath. J.P. Cassidy's slinky guitar work similarly travels across many disparate lands, but purposefully so, as if searching the world for some legendary lost riff capable of bestowing immortality. And then there's Cornelius Boots and his robot bass clarinet.

It sings like a horn, sounds like a synth, dances like an evil girlfriend – and it should be immediately welcomed into every working symphony orchestra in the world. The RBC (mythologically, an alien artifact; in reality, a bass clarinet run through any number of effects pedals) is wet and rubbery, a king-size musical condom rolled and unrolled in the deepest backroom of the darkest brothel in Dubai.

Sometimes you get the feeling that the ghost of John Coltrane has somehow possessed a Moog Voyager, though if so, Coltrane's gotten a lot more playful in the afterlife. Boots on stage is something to behold, blowing that bass clarinet like Benny Goodman being electrocuted for a triple homicide for which he will never repent. Hm … I seem to have inadvertently fused The Benny Goodman Story with Wes Craven's Shocker. Now THAT would be a worthy film. And Occidental Hygiene can be its soundtrack.

Layered over the top of the Magnesium sound – which I might have to term "sludge funk," if such a thing can be – are wild soundbites that only add to the tension and release. They probably are, but never sound, arbitrary, and the lack of proper vocals amid the instrumentation can only be a good thing … too much potential for the band to slowly turn into Primus or Faith No More.

I'm at a loss for comparisons … is Magnesum like Hendrix's Band of Gypsies, if they had lasted through the no-wave era? Or maybe Israel's version of Living Color, circa 1995? Or maybe System of a Down, had they been from rural Kentucky instead of Armenia? Or maybe Magnesium is indeed from far in the future, here to warn us, or kill us. We must stop them! Or must we bow down to them?!

I can't think of any other bands who could as comfortably and logically open for Morphine, Slayer, Beck, Magic Sam, Stevie Ray Vaughan, Eric Bogosian, Funkadelic, Gang of Four, The Avalanches, the Allman Brothers, Tangerine Dream, Black Flag, Negativland, Mike Watt, Catalyst, Ghost, Gong, Tommy Chong, or the Minibosses (who would have to be performing a Grand Theft Auto-themed "rock opera"). Wait, I think I want to organize this lineup as a festival. We'll call it the Aneurgasm Fest. Magnesium headlines; the ghost of Magic Sam opens.

The only thing I don't like about this disc is that I've played it so goddamned much that the CDR skips horrendously on several of my favorite tracks. Will someone please sign these assholes and put their shit out on real CD?! Take it from Yvonne Goolagong, everyone needs more Magnesium.