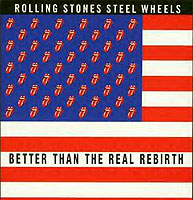 Nothing gets the kids goin' these days like two discs of 1989 Rolling Stones tour rehearsals, right?!?!

Er, sure. Better Than the Real Rebirth is another entry in my "uncool bootleg download" crusade, wherein I consistently find that if you stray from what you expect to be "cool," you inevitably find some primo shit. Primo shit that won't win you any cred points, but primo shit nonetheless.

This set would probably be better as a one-disc highlights compilation, but the full show (a soundboard recording with the band playing for about 200 people … in a stadium!) is certainly nice to have. Surprisingly, the first disc, which is mostly 80s-era Stones, is balls-out awesome almost all the way through. Didn't think you'd ever rock out to the likes of "Mixed Emotions" and "One Hit (To the Body)"? Think again … these versions are tight and extremely welcome, making a strong case for this now-neglected period of the band's history as having been, in restrospect, pretty damn sweet. Highlights include a great "Miss You," a rollickin' "Dead Flowers," and somewhat perversely, "Undercover of the Night."

Disc Two bogs down a bit, thanks to a show-stopping "2,000 Light Years From Home" … that is, it stops the show entirely. Great choice, but the '89 Stones weren't really up to this one. It doesn't help that the band seems to think it needs to use a tape-delay on the vocals for most of the songs in this portion of the set … Mick's digitally-repeated howls in "Sympathy For the Devil" are particularly unnecessary. Also, I could do without the Keith Richards spotlight songs, "Before They Make Me Run" and "Happy" … as for "Little Red Rooster," let's just say that everyone should stop playing that song.

Outstanding sound, and a setlist full of Stones gems that don't get much attention these days. It's well worth having even if you're not a huge Stones fan. Perhaps it's even better if you're not a huge Stones fan (as I certainly am not), since you may be more open to allowing yourself to get excited by some enormously anti-hip music. Is it considered music-critic treason to admit that I'd rather listen to this album than Exile on Main Street?

Tracklist: Start Me Up · Bitch · Shattered · Sad Sad Sad · Undercover of the Night · Harlem Shuffle · Tumbling Dice · Miss You · Ruby Tuesday · Play With Fire · Dead Flowers · One Hit (To the Body) · Mixed Emotions · Honky Tonk Women · Rock and a Hard Place · Midnight Rambler · You Can't Always Get What You Want · Little Red Rooster · Before They Make Me Run · Happy · Paint It Black · 2,000 Light Years From Home · Sympathy For the Devil · Gimme Shelter · It's Only Rock 'N Roll · Brown Sugar · (I Can't Get No) Satisfaction · Jumpin' Jack Flash