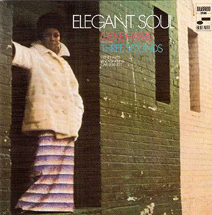 Critics often throw out "mind-numbing" as a barb when they find something too tedious, too in-your-face, too dumbed-down. But I'd never really considered this: is it possible for something to be mind-numbing in a good way?

Well, Elegant Soul certainly makes a strong case for this. Yet another groovy treasure from the seemingly inexhaustible well of late-60s Blue Notes – back when all you needed was some perfunctory music and a cover depicting a "foxy lady" – this album finds Gene Harris and crew groovin' their way through a bunch of super-unchallenging songs, accompanied by orchestra and occasional groovy female background singers.

My emphasis on the grooviness here isn't just sloppy (for once) … the album really just coasts along on the same head-boppin', finger-snappin' vibe the whole time … same tempo, mostly same key … never straying too far from a vaguely "contemporary radio" sound circa 1968. Pop elements abound, from the cover of "Harper Valley, P.T.A." (which finds the vocalists singing "Sock it, H.V., P.T.A.!") to the "Paint It, Black" knockoff "African Sweets."

Nothing to fault, sure, but nothing to grab onto either. At its most boring, Elegant Soul is Ronnie Aldrich at his grooviest; at its best, it's elevator music with a kick-ass Afro.

If only Michael Jackson had known about this record, he might have stayed off the propofol and lulled himself to sleep in style with Elegant Soul. It certainly works for me.