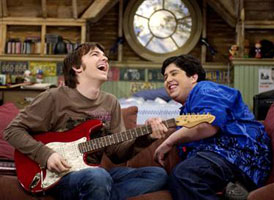 Though I watch it every time I come across it, I still can't quite tell whether I love or hate Drake & Josh, an Odd Couple-styled teen sitcom concerning the unlikely scenario of two 16-year-old classmates, one suave and popular, the other awkward and dorky, becoming step-brothers when their parents get married. This was apparently spun off The Amanda Show, which I can never bring myself to watch because I fear people will think I'm a pervert.

The show's plots invariably revolve around miscommunications, parallel situations, and some kind of blackmail or another, while resting its success on the talent of its two leads, Drake Bell and Josh Peck. Bell is a charismatic cool-kid in the Jason Bateman mold, and gets points for playing his own music on the show, and it's surprisingly good pop! Peck, on the other hand, is either the Fatty Arbuckle of the 21st Century or TV's hackiest ham since Dustin Diamond. I sit slackjawed as Peck greasebombs each scene with his graceless Gleasoning, his saggy pants and heavy eyebags evoking more pity than awe. Though he's not retarded, watching him is like watching Chris Burke get "Punk'd."

What keeps me coming back, though, is Miranda Cosgrove (from The School of Rock) as the devious younger sister who is always manipulating her brothers for financial gain or some other intangible power advantage. She's alarmingly good and surely will be America's next Claire Danes, so enjoy her while you can, before she reaches her Brokedown Palace phase.

Created by Dan Schneider (from Head of the Class and the Josh Peck of his generation), D&J has that wacky Nickelodeon sensibility that ain't breaking any new ground, but always serves to show that TV can be legitimately hipper than you'd expect. Pete & Pete it is not, but there is something good going on here. I think.