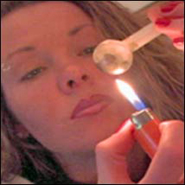 Though "reality TV" is a misleading label to begin with, it's a patently insufficient one to slap on Intervention, which is more accurately "reality-check TV." It's hard to imagine anyone with even a sliver of self-awareness not finding, in a given episode, some kind of wake-up call for their own inner addict.

Documentary television in the classic sense, Intervention is not just good TV, or powerful TV – it's genuinely meaningful TV. And depending on your own level of addiction and/or drug of choice, it has an amazingly consistent capacity to just rip your fuckin' heart out.

Each episode tracks two addicts through the throes of their chosen rock bottom, unaware that they're about to face an intervention. The show is frank in depicting each addiction du jour, be it crack or video games, vividly driving home the devastation wrought on the addict as well as the people in his or her life. What I most admire about the show is that it concentrates more on illustrating the nature of addiction rather than the juicy specifics, so you see that no addiction is particularly more tragic, or more silly, than another. Whether the person is throwing away thousands of dollars on slot machines, or drinking at work, or losing their home to cocaine, or isolating in front of the xBox, they have in common that they are in pain.

And their loved ones are therefore also in pain. Now, interventions are probably necessary in most cases; they are the hail-mary that allows an addict to come back into the light. But interventions aren't really about the addict – they're about the family and friends. Usually, these folks are coming from a place of love in their attempt to reach out to a soul in the process of being lost; in many cases, though, they're coming from judgment, denial, or outright cluelessness.

It can be a brutally thin line between wanting to help the addict and wanting to make them hurt like you hurt. Intervention shows that the addict will usually succeed if they receive love, and that they'll usually fail when they receive selfish guilt. As uplifting as it can be to see the transformation when a self-destructive meth-n-sex addict lights up with rebirth after receiving treatment, it's equally heartbreaking to see one return to the dark side because a father was too distant to forge that real connection, or a mother was too self-absorbed to see how she may have contributed to her child's compulsive need to escape.

So watching Intervention hits me on a lot of levels: identifying with the addict, identifying with the interveners, hating the addict, hating the interveners. Sometimes, just drawn in by the drama. And on occasion, shamelessly entertained by the characters (such as the happy-go-lucky beer lovin' simpleton who completes his treatment and walks directly to a convenience store to buy beer; or my favorite, Gabe, the former child-genius with the high-pitched whine who belligerently demands that his family not only pay off his gambling debts, but provide him with "tangible proof" of the payment before he'll agree to go to rehab).

More than anything else, Intervention keeps me cautious, renews my honesty, and jump-starts the deadened parts of my heart like an emotional defibrillator. There are any number of things I could find myself hopelessly addicted to, given the right combination of bad shit going down in my life. The potential is always there, for any and all of us. The goal, I suppose, is to live such that you don't end up walking into a room one day and see Jeff VanVonderan or Candy Finnigan sitting there with your family and friends, all with very serious looks on their faces.

But what, I wonder, would they do if you happened to be addicted to Intervention?