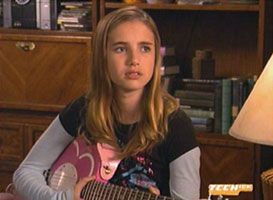 It seems like all the big stars of the next decade will come from Nickelodeon and/or The Disney Channel®, the two entertainment factory-lines pumping out hyper-confident and unnervingly empowered young robots as fast as can be. They will all have been through their hard-partying cocaine days by the same age you stopped pooping your pants (19).

Next in line for the "America's Sweetheart" tiara is Emma Roberts, daughter of Eric and therefore niece of Julia, who stars in her own sitcom on Nick, Unfabulous. This show wanders the same dizzy school-halls that Lizzie McGuire did, with mostly the same quirky approach, i.e. people getting water poured over them in classic Nickelodeon fashion, except that it's occurring only in the mind of the main character.

Roberts heads a cast so diverse it seems almost like a Noah's Ark of races and handicaps, starring as a wallflowery girl who writes songs, has a Daisy Rock guitar (!), and works with her friends to hatch all sorts of crazy plans to achieve things like having a first kiss, getting a boyfriend, and having her name emblazoned on the school gossip-graffiti wall. (?)

It's breezy and engaging in that slightly weird, slightly tame Good Burger sort of way, and I like it. The writing is honest and fun, and the cast is cheery and easy to relate to. Although I must say, my interest in these teen girl-power shows, which perhaps was cute when I was nearer the target age, these days can only be described as prurient. Even so, it's better than watching people covered in scorpions eating their own feces, or whatever is happening elsewhere on TV these days. Whether it's the people or the scorpions eating their own feces is for you to decide.