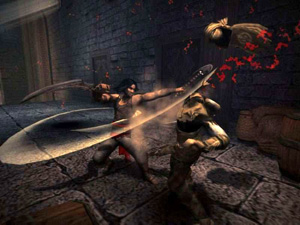 Prince of Persia—Warrior Within (2004)
for GameCube, PlayStation 2, Xbox, and PC
Developed by Ubisoft Montreal
Published by Ubisoft

As one might expect in a sequel released within a year of the original, Prince of Persia—Warrior Within is essentially the same game as its predecessor, Prince of Persia—Sands of Time. Where in the first one you gain the power to manipulate time, in this one, you actually travel through time. I can’t claim to fully comprehend the storyline, with all the temporal paradox cause/effect mumbo jumbo, but basically you go to the Island of Time to kill the Empress of Time to destroy the Sands of Time, and end some sort of conundrum you caused in the first game. Meanwhile you are being pursued periodically by a netherworldy beast called the Dahaka, whose duty it is to consume time trespassers. He looks a bit too similar to the Balrog from The Fellowship of the Ring, just without the flames.

All that is just fluffery, as the core of the game, as with any Prince of Persia game, is using superhuman agility to run, jump, grab, swing, flip, and do whatever else you can to avoid deadly traps, precarious situations, and run-on sentences. This is where Warrior Within is at its most exhilarating, and thus most fun. It is satisfying to run on a wall, swing on a pole, flip up to another pole, dodge a deadly saw blade coming at you, knife your way down a wall-mounted banner, pirate-style, and then finally land safely. The alternative is a violent and glorious death, and since you have the ability to rewind any mistakes you make, it keeps the frustration to a minimum.

Frustration does set in, however, when engaging in combat. It’s not terribly difficult, but sometimes you get trapped in the animation of the combo you have mistakenly unleashed, only to have your enemies pounce on you while your move is still executing. The system is not as fluid as I would like, but fortunately the fighting sequences are brief and sporadic, like my hemorrhoid flare-ups. And then the bad guys have pitifully lame voices, and insist on saying their stupid lines whenever you get near them.

Another questionable feature is the collecting of secondary weapons. The game keeps a manifest of all the off-hand weapons you find. This is a neat little extra, and more common in games these days, but the problem here is that you never know precisely which weapon you are holding. The only thing that shows up on your screen display is the weapon’s icon, which can only be a sword, axe, mace, or dagger—no specific name. So the only way to tell if you have a new weapon is by the way it looks, and since many of the weapons look very similar, you will likely find yourself with an incomplete collection, because picking up every damn weapon you see would take up way too much time. It’s just another sign of a game rushed out the door to make the Christmas deadline, quality be damned.

Comparisons to Sands of Time are inevitable, I suppose, but mostly pointless because the games are almost identical. The atmosphere of the first one appeals to me a bit more, when you’re exploring a sort of castle in a dream world, whereas this one, while retaining some of that ethereal style, has more of a feel of a dungeon crawl. You can’t go wrong with either one, though. It’s appropriate they didn’t title this one Prince of Persia 2, because it is clearly not a proper sequel, just a side story.