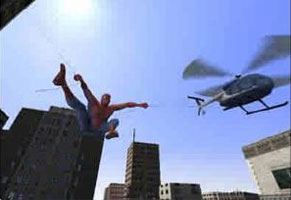 It's a testament to the quality of the Grand Theft Auto franchise that a summer movie tie-in rips it off. On the exterior, this sounds like a good idea, a real win-win situation. But this is not so. Spider-Man 2 is enormous, yes. It is open-ended, yes. However, it is not entirely fun. At least not for the dozens of hours you need to put in to get a 100% completion rate.

The best part of the game is freely swinging around the gigantic, somewhat realistic replica of Manhattan, just shooting your webs out without a care in the world. This is like how in the Grand Theft Auto games, it is fun to just drive around aimlessly and see where the day takes you. Eventually, you will have to do something, though, and that's where Spider-Man 2 swings into a brick wall.

There is a core plot here that follows that of the movie fairly consistently. There is also a side-story involving some of Spidey's famous comic-book villains, like Mysterio and Shocker. That's all well and good. But outside of that, you are involved in nothing more than a scavenger hunt to collect an obscene amount of hidden items, and worse yet, complete an equally obscene amount of challenges to see if you can get from point A to point B in time. These tasks number in the hundreds. After a while it becomes truly miserable.

And that's not all. Being Spider-Man, you naturally want to kick a tail or two, so people on the street will randomly call out to you to help them from getting mugged, retrieve stray balloons, prevent bank robberies, catch purse-snatchers, or other mindless crap like that. It happens over and over and over and over and over. It's your choice whether you want to do this, of course. But for those who enjoy going for 100% completion, just remember, these are hours you will never be getting back. 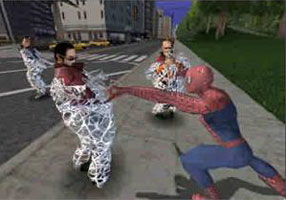 It wouldn't be such a hassle if the controls weren't so clunky. And the magnitude of the city demands that the graphics can't be clean and sharp, which is to say, the graphics are almost PlayStation quality. PlayStation 1, that is.

To its credit, Activision did wrangle the three lead actors from the movie to do voice work, but I question whether that's even necessary in a game like this. It's not like it ensconces you in the make-believe world any more, or at all, for that matter. Some of the other voices are laughably awful, such as that of J. Jonah Jameson. I honestly wondered whether they had mistakenly left in a placeholder vocal track. Would it have been that hard to call up J.K. Simmons and get him down to the studio for an afternoon? I'd trade a Molina, Dunst, and Maguire for a mint-condition Simmons any day of the week.

I guess the lesson here is, if you're trying to find a Grand Theft Auto game, it's not going to have the word "Spider-Man" in the title.