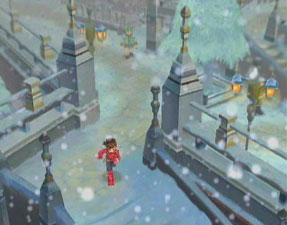 Maybe it's wrong to review a role-playing game after only playing it for five hours. It surely appeals to typical RPG fans, and I can see why. But it doesn't appeal to me. It pushes all the wrong buttons and I refuse to go on.

The biggest gripe I have against modern RPGs, and a lot of older ones, is that there is really no way a player can get the complete experience without outside assistance, be it a hint book, a FAQ, a personal visit to the developer, etc. ToS is guilty of this in several respects.

For example, throughout the game, each character earns a variety of titles, which you can change on a whim depending on your needs. So if you kill a thousand monsters, you'll earn the title of "Monster Killer" and it will allow you to get a strength bonus when you level up. But there is also a title that you get if you keep your starting, crappy sword equipped until well after the point when better weapons become available. How is a player supposed to have ANY idea there is a bonus for keeping your piece-of-shit starter sword equipped?

Is this fair? That's like your realtor telling you, after you've sold your house, that there was a pot of gold hidden in your closet the entire time, and was yours to take if you only knew about it. So you have two choices: you can finish the game, but not "complete" it; or, you can go out and buy the hint book, the royalties of which go to Namco. It's a classic RPG catch-22, most often perpetrated by Square in the Final Fantasy games.

It is this sort of approach that has steered me away from the RPG genre over the past several years. I enjoy completing games and finding all their secrets. By myself. But to do this, I need to have something in the game pointing me in the right direction. In another example, the game rewards you with points after each battle. You can spend these points on gems that give you new battle abilities. That's fine. But you know what else you can spend them on? You can spend them on bonuses you get upon playing the game through a second time.

Is this what people do? Do they play RPGs through more than once? The time and patience required to do it just a single time is already asking a bit much. I applaud a company making a game worth playing for months, but please, do it in such a way that I only have to beat it one time. There are far too many other games to play. I shouldn't be punished because I'm a completist. 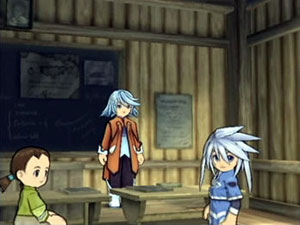 Outside of that, the story of the game is so banal it's not even worth mentioning. The battle system is innovative, or not, because I haven't played any of the previous Tales games. It involves the use of button combos, which I generally find irritating.

On the other hand, the graphics are quite nice, with cel-shaded characters and hand-drawn environments. A big plus, as least for me, is that you have the ability to pay people in town to go back and find stuff that you may have missed. This remedies another one of my biggest complaints about RPGs: that there are items which, if missed the first time, will never be available later on in the game. If you want it, you simply must play through a second time.

My favorite aspect, though, is that each character has the ability to cook. If you explore the nooks and crannies of the game diligently, you keep finding a guy called the Wonder Chef, and he teaches you new recipes.

The issues I have with Tales of Symphonia are symptomatic of almost any game that calls itself an RPG, so perhaps I'm being too harsh. If you're someone who can get past these things, I'm sure the game is a lot better than I give it credit for. But I believe that these games can be significantly more enjoyable if they just make a few minor adjustments. Pumping 40+ hours a game more than once simply isn't feasible for anyone with any semblance of a real life.