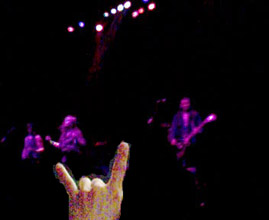 La Fée: We've been seeing metal shows together for what, 15 years now? I like to think that's an indication that we're not becoming old and lame. However, our recent metal binge has left me rather burned out, I must admit.

Maybe we just can't bang our heads like in the old days. Certainly that was the case at the Helloween show … it was the first time since Monsters of Rock '88 that I actually had to sit down before the show was over.

Absinthe: Yeah, Monsters of Rock was seven hours, though. I think Helloween was about three. Frankly, I think we're just getting lame and old. The days of getting squashed between a few hundred seven-foot-tall, shirtless, sweaty headbangers at a Manowar show are long gone and are completely unappealing to me. I assure you that I needed to sit down as much as you did. I can't help but think that going to see Helloween today is the equivalent of seeing a Paul Revere and the Raiders reunion in the 80s. To think I laughed at my parents back then, while now I'm certain some unborn teenaged son of mine is laughing at me.

La Fée: You're probably right about Helloween being past their prime, but not having seen them before, I was totally satisfied with the band. Tight, good musicianship, solid vocals, and great song choices. It couldn't have been clearer why Helloween is one of the most famous power metal bands of all. I'd even go so far as to say they're kinda legends! Which I couldn't say for the ridiculous opening band …

Absinthe: Yeah, you probably don't recall that there were actually TWO opening bands. We saw one or two songs of the first band, who were completely non-descript. The band you're referring to is Jag Panzer though, I'm sure. Apparently they hadnt yet showed up to the theater when they were supposed to go on, so they were almost cancelled. Then miraculously, they appeared and played on the non-descript band's gear. Jag Panzer actually have been around for quite a long time, and have a considerable following. I was semi-impressed by the vocalist and lead guitarist. The guitarist in paticular was very good, but the songs were all lame metal anthems about warriors and dragons and such. While I'm sure that we both enjoyed singing along to the goofy song "Iron Eagle," by the time their 4 or 5 songs were over, we had clearly had enough.

On the other hand, Helloween came out with all guns blazing. This was their first US tour since 1988, a tour I can happily say I attended, and they must have been out to prove their relevance. Opening with "Starlight and Murderer" off of their debut early-80s EP was quite a shock for me. I never, ever thought I would hear those songs performed live. Though "Starlight" is one of my favorite Helloween songs, it took me a good minute to realize they were playing it. I dont think they've performed either of those tracks since '86, so I was completely taken aback. It was really an odd choice though, seeing as how the guy who wrote them hasn't been in the band for over fifteen years.

La Fée: My good concert karma saw fit that all of my favorite Helloween songs (well, that is, both of my favorite Helloween songs) were also played: "Keeper of the Seven Keys" and "Dr. Stein" (both from Keeper Pt. 2). Plus "Eagle Fly Free," which I'd totally forgotten but immediately vowed to cover. The world needs a new version of "Eagle Fly Free," and I am just the man to provide it.

Absinthe: The setlist was oddly paced, though. They pushed most of the big, older songs to the front of the set. This included nearly all of the ones already mentioned (excluding "Dr. Stein," which I have mixed feelings about anyway) plus the excellent "Future World," while the newer songs, which are much less familiar to us Americans, were all at the end. Some were very well performed ("Power" and "I Can" were quite memorable), but after the opening onslaught of their most well-known songs, it was kind of a let down. This was when we decided to sit down. I suppose the newer material is important to them, seeing as how only two original members still exist from the glory days of '85-'88 …

There were some additional negative aspects as well, like when Michael Weikath, an original member and the leader of the band these days, seemed about to fall over. He looked old, drunk, and kinda bored. He did still manage to pull off all of his rather difficult guitar parts, with a few notable exceptions here and there. Surprisingly, he was clearly shown up by the brand new guitarist, Sascha, who couldnt have been a day over 21. He blazed through all of ex-guitarist, founder, and metal genius Kai Hansen's guitar solos with extreme precision. I must say that it was sometimes like watching a cover band.

Andi Deris, the vocalist and unskilled speaker of the English language, is a good singer and songwriter in his own right, but is absolutely no match for ex-vocalist Michael Kiske. Former members Kiske and Hansen really created the brilliance of the classic Helloween. Since neither of them have been in the band for over a decade, it sometimes seems like the existing band is just riding the wave that really ended with Kiske's departure. Anyway, maybe I'm just too picky. They were one of my favorite bands back in High School, and they still managed to pull of a great European metal show. Us yanks here in the colonies rarely get to see this kind of performance, and it was well worth the price of admission. It was too bad that they had to cut the final encore of "How Many Tears" short. The management of the Vic came out and told them that they had played past curfew. Funny.

La Fée: And don't forget that Andi spent much of the night taunting the audience about how they weren't making him "erect" enough with their cheering. He must have made about a dozen erection jokes through the course of the show. So all told, a good night for music and comedy.

Absinthe: Yeah, the dick jokes were a little trying. I think at one point he even said that he was never quite sure anyone understood his poor English, then quickly switched to "the erectivity of himself." Amusing, but all in all a great show and quite possibly the last time we'll ever see Helloween tour this side of the Atlantic.