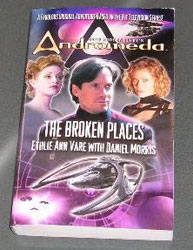 Would you be surprised to learn that A: "Hercules" isn't on the air anymore, B: the guy who played Hercules is on a new show called "Andromeda," and C: The new show has been running for years and was created by "Star Trek" creator Gene Roddenberry, who's been dead since the early 90s? Well I sure was. I'd never even heard of "Gene Roddenberry's Andromeda," but I guess I should have, because any new show created by a guy who's been a corpse since 1992 has got to be worth a look.

And I guess the logic is that if you love the series (if you've actually seen it) then you'll love the tie-in novel. This looks like the sort of thing I would have enjoyed as a kid, back when I considered a "book" to be something like the novelization of Back to the Future 2. I mean come on, if you don't read the novelization, how will you know what Marty's thinking when he arrives back in the alternate 1985, only to find that Biff now runs the town, his mother is a whore and his father is dead? The movie only takes it so far, but the book shows you whole new levels you never dreamed possible.

And this may (or may not) be the case with Andromeda: The Broken Places, a novel based on the television show I never heard of until last Wednesday. I don't know what network it's on, but if I had to guess I'd say it's on cable someplace, probably on a channel that lives somewhere between 50 and 90 on the cable box and reruns a lot of episodes of "The Incredible Hulk" and "The A-Team." Just a hunch.

It's difficult to say this book is bad, because frankly, I haven't read it and I'm not going to. But just based on the text from the back, I think it's safe to say that this book smells about as good as Gene Roddenberry does these days. To wit:

"When Beka Valentine's ne'er-do-well brother, Rafe, limps aboard the Andromeda Ascendant in the stolen junker, he asks Beka to go with him to find their mother. Beka knows Rafe's plan is nothing but trouble.

And the Andromeda has trouble already. Captain Dylan Hunt is trying to conclude a delicate negotiation between Nietzscheans and Humans. He knows that one false move could lead to another Human-Nietzchean bloodbath. And he needs every level headed crewmate he's got. That means Beka, who, for all her emotional

But Beka can't resist the chance to find her long lost mother, who went on a quest years before to find the technology of the lost Vedran race. Only, if she and Rafe find their mom and she has the Vedran device, will they able to control it? Or will it destroy the universe as we know it?" 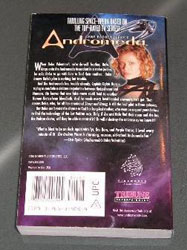 Now if the book itself is as poorly written as the text on the back, then I'd have to say Andromeda: The Broken Places is probably as bad a book as has ever been written. Though I'm never going to find out, because as I said: I'm never reading this book. I love sci-fi, but not enough to sit down and read a book based on a show I don't watch and that frankly, looks pretty awful.

However, while this book (probably) makes for very bad reading, it makes for excellent gift bag garbage, which is how it ended up at the Saturn Awards. My guess is whoever distributes these books had a few billion copies left over and they were only too happy to get rid of a few hundred for the Saturn Award gift bags. If this book is as bad as I think it is, then the publisher is probably building himself a house out of the unsold copies. But he'll have to leave off the garage, because of the copies he donated to the Saturn awards.

I saved the best part for last, though. The back of the book also bears a quote, singing the praises of this epic novel. And that quote comes from none other than the actress who plays "Beka Valentine" on "Andromeda." She says the book is "charming, raucous, old-school Andromeda fun."

I have trouble believing that anyone, even "Andromeda" fans are going to be swayed by this woman's endorsement. After all, she's an actress and the only thing she probably reads are scripts, which means she's about as qualified to endorse a book as I am to endorse clean living and sobriety. On the other hand, it's probably difficult to get the book reviewer from The New York Times (um, what's his name again?) to publish a review of a book like this, so you have to go with whoever's handy.

I'm surprised they didn't try to coax a review out of William Shatner. That guy will do anything, so why not this? Just give him a check and a pen and I'm sure he'll have his ghostwriter bang out one hell of a review in no time flat.