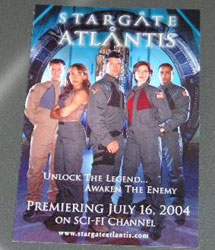 Have you ever wanted to say hello to a friend and let them know that you're a huge dork, all at the same time? Well if so, then you need the "Stargate: Atlantis" postcard. Now I will admit that I saw the original Stargate movie in the theater (the one with James Spader and Kurt Russell) and I found it mildly amusing. And I've seen the "Stargate" TV show once or twice, though I wasn't nuts about it. I don't know if the words "This could really use Kurt Russell" have ever been uttered, but that's how I felt about the "Stargate" TV show. And believe you – Richard Dean Anderson is NO Kurt Russell.

Also, even though "Stargate SG1" has supposedly been on the air for over 10 years, I still have no idea what time it plays or what channel it's on. Maybe it's on right after "Andromeda?"

And now we come to "Stargate: Atlantis," the spin-off to a show based on a movie that wasn't all that great to begin with. I can't figure out if the "Atlantis" part means they work out of Atlantis and go through the stargate to other universes, etc, or if it means they're going to Atlantis, which means they'd be doing that every week, and that could get a tad boring.

I guess it doesn't matter, because I'm never going to watch it and could really care less. But I do have the postcard and I'm guessing so do 500,000,000 other people, because I'm thinking whomever produces "Stargate: Atlantis" is giving these things out to anyone who will take one.

The guy building a house out of "Andromeda" books is probably using "Stargate: Atlantis" postcards as wallpaper. I'm planning on mailing mine to my brother and writing "Is this that show you were telling me about?" just so I can make his mailman think my brother is a complete and utter dork.