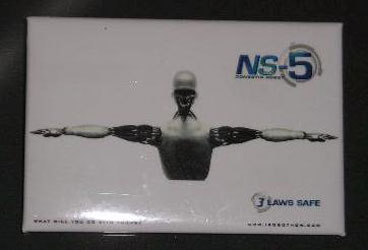 Look out America, that sassy Black gentleman Will Smith is at it again, this time lighting up the big screen in a movie version of horribly sideburned Issac Asmov's very boring sci-fi epic, I Robot. In the movie, Mr. Smith plays a guy who makes a lot of jokes about how uptight white people are. I don't know the actual plot of the movie, but five'll get you ten that Will busts on whitey at least once during the film. Personally, I'm cool with that. I'm not nuts about white people, and I'm one of them.

After going to the website shown on the pin, I quickly deduced that the site is yet another in a disturbing trend: fake sites for movies, created to look real and fool people, thus generating free publicity for a shitpile of a movie that otherwise no one would look twice at. Recently the bowel movement of a movie Godsend tried this tactic, with a website ostensibly advertising a clinic that offered full cloning of humans, mirroring the movie's "plot." It turned out that the website got more attention than the actual movie, which isn't surprising, seeing as it starred Robert DiNiro and John Stamos's wife. Now who's the Hollywood brain doctor who gave that the thumbs up? I hope he likes cleaning windshields on Hollywood Boulevard, because methinks that's where he's bound.

Anyhow, the I Robot site is similar to the Godsend site, in that it purports to be a site all about robotics, advertising a cool new unit that will be available July 16th. Amazingly enough, that's the same day I Robot hits theaters. How much do you want to bet that we'll be seeing at least five stories in the next few weeks about idiots who think this is a real site and email the webmaster, trying to buy a robot?

I don't know if this marketing ploy ever actually works. I'm not sure someone goes, "Wow, what a great fake website, I gotta see the movie this is sort of based on." Godsend, appropriately, tanked, but maybe I Robot will have more luck. It doesn't look too good, but if Will says "Damn!" a lot and there's at least one wisecracking robot in the movie … then they've got my ten bucks.

As for the site, it's slightly interesting to look at, though the novelty wears off real quick. Maybe if you don't realize it's a fake site, it's more fun. Because once you know it's basically a sales pitch, it's tough to rationalize the fact that you're wasting your time on a commercial, no matter how cool it is. The Hollywood honchos who conceived this site are really, really hoping that you'll be so bowled over that you'll forward the site to all your friends and they'll forward it to all their friends and by July 16th, the entire planet will be lined up to see Will Smith fight robots (or whatever he does in the movie). I don't think that's going to be the case, but I guess hope springs eternal for these marketing types.

As for the button, I don't think I'll be attaching it to my cool jean jacket anytime soon, even if I do have free spot now (since my "If you can read this, you're too close" pin fell off the other day). I'm not nuts about wearing an advertisement, especially one that's actually an advertisement for the advertisement for a movie I doubt I'll ever see. Some people probably get off on that sort of thing, but it's not my cup of tea.

No, I think I'll just do what I normally do with stuff I find totally useless: try to sell it and then when I fail to do so, give it to a homeless guy when he's not looking.

The pin will work especially well, because I can actually attach it to the guy's coat. Hopefully the local news will spot this and the studios will come under fire for using homeless people to advertise their movies. Doesn't seem likely … but a man can dream.