Everyone loves big splashy Hollywood awards shows, right? The clothes, the press, the celebrities … it's hard not to get excited when Hollywood's brightest stars come out to shine!

Which is why I was pretty darn excited last week when I found myself running elbows with such Tinseltown luminaries as Lou Ferrigno and Kevin Sorbo. Then I turn around and bam- there's superstar Sean Young, having a drink with none other than Tom Arnold!

Where did I see all these superstars under one roof, you ask? At the Oscars? The Golden Globes? The B'Nai Brith Awards? Wrong, wrong and wrong again. The correct answer is The Saturn Awards – the only awards show (that I know of) exclusively dedicated to horror, sci-fi, and fantasy. Each year they honor the people who bring us the aliens, monsters, elves, robots (I could go on forever here) that we love to watch on TV and in movies.

Any award show where movies like The League of Extraordinary Gentleman and Underworld are up for best picture is A-OK in my book. This is truly a celebration of all the things I love most, and it was great to sit amongst my fellow fans and pay tribute. And I should point out that there actually were some A-list celebrities there, such as James Cameron and Sean Astin, both of whom seemed genuinely happy to be there, sharing their love of the genre with all us attendees.

Now I was going to review the show itself and go in-depth about the nominees, the winners, who attended, etc. I was planning to talk in detail about stuff like Sean Young reading the wrong list of nominees and then stopping in the middle of her presentation to say "Do you ever find yourself wondering why Sean Young hasn't worked in 14 years? Well so do I!!" 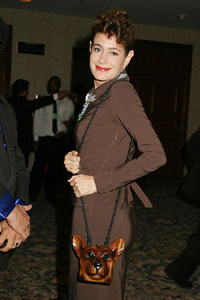 Likewise, I was going to mention the movies and TV shows I'd never heard that cracked me up because they sounded so fake, such as Bionicle: Mask of Light. I was even going to talk about the acceptance speech Sean Astin gave that lasted longer than all three Lord of the Rings movies combined.

Yes, I was going to talk about all that and more. But you know, I've decided not review the show. It was great and I had a lot of fun, but I don't think I can do it justice in a review, other than to recommend that you all try and attend next year's show, so you can witness the magic for yourself. For fans of sci-fi and horror, the Saturn Awards are like Mecca, so I suggest those of you in LA start camping out for next year's show, because I promise you, it's worth it.

Instead of reviewing the show, I've decided to review the gift bag they gave out after the show. If there were an awards show for crappy gift bag items, I'd say the Saturn Awards gift bag would have to build a trophy case to hold all the awards it would win. Packed to the brim with totally useless garbage that they clearly got for free from movie studios, the Saturn Awards gift bag seemed to command its own in-depth review. 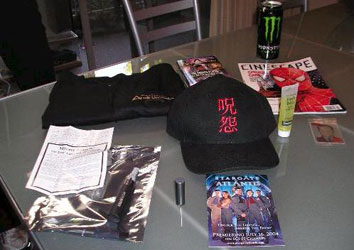 But why waste time just telling you how bad the contents of the bag were, when I can show you, in great detail? Join me as we go inside the gift bag they gave out after the Saturn Awards. Well, wait, we're not literally going inside the gift bag, it's much too small for that. But rather, we'll examine the contents of the bag. Right, that was probably self-explanatory, but I had to say it for legal purposes. Now let's get to it!